This is the fourth in a series of guest posts on the Museums at Night blog.

Social media has become such a central part of what I do at Fabrica that I find it hard to remember that a year ago I had only just made a Fabrica page on Facebook and we had no Twitter account at all. It’s been a steep but very enjoyable learning curve, which isn’t over yet – indeed may never be over. That fills me with a kind of glee, though I’m aware that isn’t the case for others who view the whole thing with dread. ‘Another thing to try and understand? Another demand on my already overstretched time?’ Well, yes, but here’s why I think it’s important – maybe the most important thing that you could be doing right now.

Social media is new and it’s changing daily but it’s not going away. Facebook may falter, Twitter may well die but something will come along in their place and the landscape for the arts, the world we work and live in, and the world our audience lives in, has changed. We need to change with it. The nature of our engagement with our audience has undergone a radical shift because they have now become visible; they can find and talk to each other and to us, there can be dialogue and we can listen in to what’s being said. The silent audience is history. This is such a fundamental change that I’m still, along with everyone else, trying to figure out what it means and how we make the most of it. There’s much more to say than I have space for here, but think about the headline opportunities that social media offers: audience engagement and development, advocacy, increased word of mouth, creative participation. We’ve seen all those things happen at Fabrica in the last year.

This is such a new world we’re creating that there are no rules. Perhaps a few guidelines are being formed, some good and bad practice, but no rules – except one: you can’t opt out. So just do it, take baby steps, play around, have fun with it, be playful (because people will respond to that) and creative. A word of caution: organisations, arts or otherwise, that just use social media for push marketing are likely to come unstuck. There’s a strong thread of evidence that people don’t want to feel that you’re abusing your position by selling them stuff. After all, anyone who follows you on Twitter or becomes a fan on Facebook is according you the same status as their friends, and you need to respect that.

I want the arts to be pioneers in this new world and make sure that we stake our claim in it, because it offers us so much richness and excitement and we offer so much in return. So let’s not allow it to become the preserve of big businesses and brands. I know it feels overwhelming – it does to me too, and I wish I had more time to devote to it – but it also feels like a privilege to be involved right at the start. 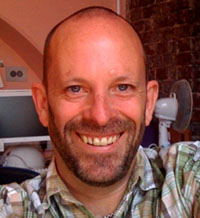 You can follow me on Twitter here and Fabrica here. I also write a blog for Fabrica, which goes into a lot more detail about what we’re doing and have done: The Tangled Hedgerow. Comments, feedback and thoughts are always welcome and I’m always up for chatting more about this whole subject. You can also find Fabrica on Facebook and I’m also on Linkedin.

Laurence Hill is development manager at Fabrica, a contemporary art gallery in Brighton. Broadly speaking his role at Fabrica is focused around audience development, which he tries to think about in a holistic way. He claims to be only marginally obsessed with Twitter.

2 responses to “Guest post: Laurence Hill of Fabrica explains how small cultural and heritage venues can make a big noise with social media”