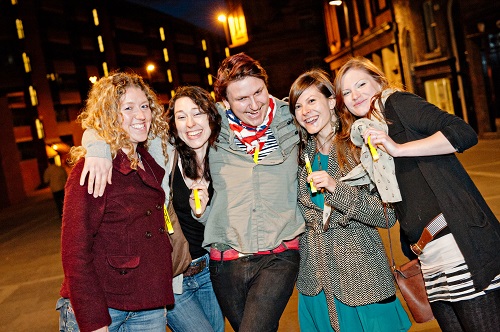 The Late Shows was developed as Newcastle Gateshead’s response to the Museums at Night festival. In our first year, 2007, we opened on the Saturday night only having begged and bullied 14 venues into taking part. We had 4,500 visits. Last year (2013) we had 60 venues and 33,000 visits.

We restrict participation to venues that are not normally open at night, but now the evening venues want to be part of it as well so we have our own ‘fringe’, The Late Lates, with evening venues staying up past their bedtime too.

The weekend starts with our ‘Friday night warm up’ where we open venues in the Ouseburn quarter of the city, where a number of arts organisations are based – then on Saturday night we open the lot!

We were very fortunate in hitting a distinctive brand and title for it in our first year. It’s designed to appeal to the Arts Council’s ‘Fun Fashion Friends’ audience segment, that is, 16-34 year olds who intend to engage with culture but maybe don’t get around to it.

We have had steady audience growth each year with existing audiences coming back and bringing their friends. It’s fair to say the Late Shows is an eagerly anticipated event in the calendar.

We manage it via a steering group made up of experts from different organisations, and we have a volunteer crew for the event who give out glowsticks and brochures, make visitors feel welcome and signpost them on to other venues.

For more information, come to www.thelateshows.org.uk!

Bill Griffiths’ day job is Head of Programmes at Tyne & Wear Archives & Museums. He started his working life as a field archaeologist before becoming involved with the development of Segedunum Roman Fort, Baths and Museum on Hadrian’s Wall. From there he became the Museum Hub Manager for the North East and set up The Late Shows in 2007.

Thanks, Bill! If you’re reading this and you have an interesting story to tell or case study to share about planning or marketing after-hours events in arts or heritage venues, I’d love to publish your guest posts as well. Please get in touch with rosie@culture24.org.uk.